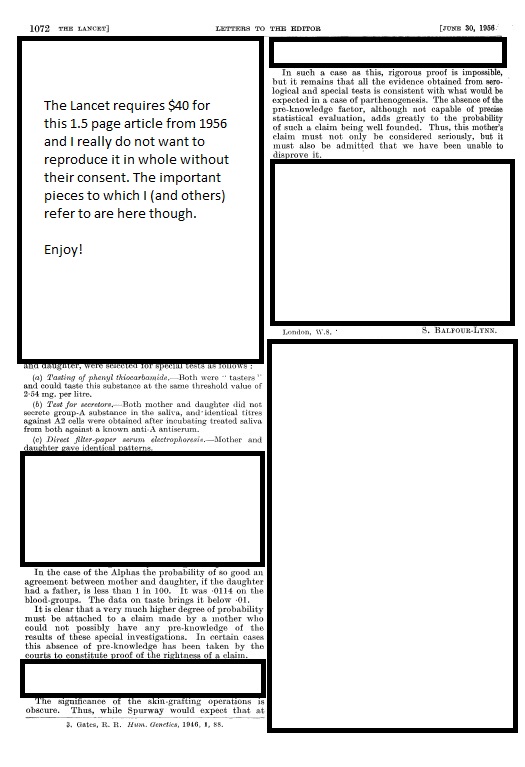 Christmas brought to me some “new” articles about one of the hot topics of the days: Parthenogenesis. After some reading and searching I was astounded to find out some sources claiming that parthenogenesis is not only possible for humans but that it has been possibly been observed too (1). (V: by the way, parthenogenesis in animals is extremely COMMON, to a point that it makes you wander: do the atheists which laugh at the birth of Christ believe that humans do not belong in the same category as the animals for which parthenogenesis phenomena are so common?)

This article cannot be found in the internet for free. So one has to rely on what other say about it and its content! The fact that I had to pay $40 (with taxes) to buy a 1956 article and some highly antiphatic/ contradictory reports on its conclusions piqued my curiosity. When I read what the book “The Mysteries of Human Reproduction” (by Raymond W. Bernard) (14) said, in contrast to what other sources said (for the SAME Lancet publication!) I was finally convinced: I had to buy the article to see its contents for myself!

In more than two sentences:

READ ALSO:  Meditation results and Religion as a “Set of Wisdom”…

It is time for science to become more courageous so as to pursue more actively the analysis of ambiguous subjects. Hiding problems under the carpet is not good for anyone.

To all the atheists in the world: HAPPY CHRISTMAS!