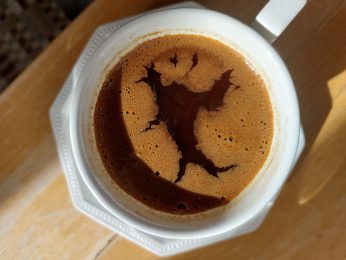 The ghost imaging technique forms an image by correlating a beam that interacts with the object and a reference beam that does not. Individually, the beams don’t carry any meaningful information about the object. The imaging technique works with visible light, x-rays and other parts of the electromagnetic spectrum and, when the structured light beams are generated computationally with spatial light modulators, can be performed with a low-cost single-pixel detector instead of a complex, expensive camera.

To apply ghost imaging to moving objects, the new method uses a small number of light patterns to capture the position and trajectory of the object. The researchers developed an algorithm to cross correlate this positional information with blurred images captured at different positions, allowing a clear image to be gradually formed. (1)

Looking at a blurry image.

Making it clearer with time.

The more you know, the more clear it gets.

But no matter how much we clear the initially blurry picture.

The fact will remain that when you first looked at it…

The picture WAS blurry…

And what is important is not that you saw it at the end.

Do you get it now?

It is you who painted the picture.