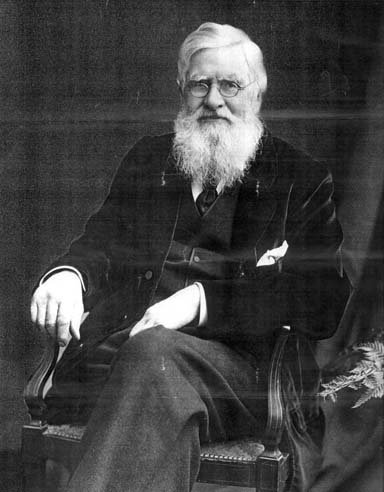 Not all great ideas are accepted with the same thrill that the “discovery” of the Higgs Boson was… There are times when a genius is too… genius to be completely ignored but whose ideas are too dangerous for some to accept “as is”. In these cases the scientific community has developed good reflexes – the dangerous ideas are just ignored and life goes on as usual. The main problem is when those ideas are crucial for humanity. How would you feel if the most important ideas of science and philosophy have been withheld by you based on the personal interests of a handfull of “scientists” ?

Russel was the man who gave birth to the Theory of Evolution (ToE) over a year before Darwin strole his idea and presented it as his [see Russel Wallace and Evolution Theory]. However he thought that his theory could not be applied to humans and could not explain things like consciousness or altruism. That was all it took. From being Head of the anthropology section of the British Association, he finally died alone and in poverty – almost unknown.

During the era of Russel, the scientific community was beginning to build its models based on the newly discovered materialistic and mechanistic ideas that still dictate the way we think today. It was too difficult for them to accept the possibility that a man like Russel, who believed in humans and even considered the possibility of paranormal phenomena, could be part of the scientific elit. The renown philosopher William James who lived in the same period, also noted in his lectures the too materialistic dogmatism of his time and the unexplained reluctancy of scientists to analyze phenomena non falling into the mainstream ideas of medicine and physics of that period. A reluctancy which has been transformed into a denial today.

Who does not know Dr. Tesla? Nikola Tesla had found ways to generate free energy and distribute it anywhere in the world without cables. Well, you can imagine what happened after that [see “No Free Energy conspiracy against Tesla et al” section at Conspiracies for Fun article]. After an extreme war by Edison and power companies, we now experience the results of the company-controlled “free” science we have: paying great amounts of money to get electricity at home. Scientists have tried to show they are genounly “interested” in the ideas of Tesla but the pace in which they progress shows otherwise – for example some MIT scientists have announced that they managed to transmit electric energy via the air but only in experimental level (and guess what – noone has ever heard of that re-“discovery” again).

Gödel was another greatly interesting case. Being the second greatest logician of all times after Aristotle, he formulated the Incompleteness Theorem which actually put an end to the vision of science to be the holy grail for all knowledge. He actually proved that science cannot prove everything! And again, how difficult is it for someone to predict his fate? Right now, you have to search if you want to learn for the Incompleteness Theorem and you have to search even deeper if you are to find our its true implications for the “all mighty” science. However Gödel did not stop there. He also found out that the notion of “time” as we know it in physics is void of meaning – he calculated a specific set of solutions for the Theory of Relativity and found out that the variable of time (t) was written off. (Gödel was the one who first discovered that time travel is possible and few of us understand the obvious – if time travel is possible then the “past” has not… passed! Time does not have any meaning) Now that’s an idea that you have to search REALLY deep to find more about! Only his biographer has written a somewhat widely known book about that. Read Philosophy Wire: Time travel and dogmatism against Gödel (or Harmonia Philosophica Wires tagged with Time or tagged with Gödel) to begin your search…

But this is not over. Gödel, as if wanting to make sure he would stay in complete obilivion, also wrote a proof for the existence of God! [see Gödel’s proof for God v2.0] He was too afraid to publish it while he was alive, but his proof was published after his death. The end is again too predictable to be non-boring: many criticism against his proof by people who do not even understand it…

Censorship in science is continued today. Any idea that is against the mainstream materialistic / mechanistic dogmas of today is rejected and fought off fiercely. The “all knowing” science of today still refuses to investigate into Near Death Experiences, still “does not see” any reason to seach for paranormal activities, denies that any alternative medicine [see Against alternative medicine… But why?] can offer any good (see the case of Wilhelm Reich who died in prison for discovering things the medical community could not stand for – related sources: 1, 2, 3, 4, 6, 7, 8, 11, 12, 13, 14), still chases off anyone expressing an idea that might be dangerous to the billions of dollars of research funding the “mainstream” scientists get (see Philosophy Wire: Scientific censorship IS faster than light! or the related to “Light” Philosophy Wires).

Free thinking is the holy grail of philosophy.

Money and nihilism is the holy grail of science today.

Be a philosopher. Not a scientist!