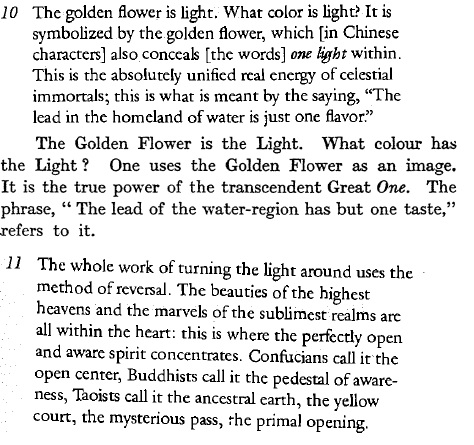 The secret of the Dark Flower

The book entitled “The secret of the Golden Flower” is an oriental alchemistic work which gained much reputation after Carl Jung commented on it and interpreted its content through his deep knowledge of the occult, alchemy and psychology. The book is essentially a guide to meditation and it is written in very simple language – or so we are meant to believe. Because after all everything must be simple for the “simple people” to understand, right?

The Secret of the Golden Flower was first translated into German by sinologist Richard Wilhelm, a friend of Carl Jung, who had been introduced to the work by his Chinese teacher. The work was later translated from German to English by Cary F. Baynes. In 1991, the text was translated afresh from the Chinese original by Thomas Cleary, a scholar of Eastern studies, who criticized the validity of Wilhelm’s translation, characterizing it as incomplete and inaccurate. [source]

Because the still-current Wilhelm/Jung/Baynes edition of this manual contains dangerous and misleading contaminations, a primary consideration was to make the contents of The Secret of the Golden Flower explicitly accessible to both lay and specialist audiences.

Cleary gives some examples of the way that the text was commonly misinterpreted by Wilhelm and Jung, and describes such an instance in the very beginning of the text:

In the first section of this text, for example, Wilhelm translates zhixu zhiling zhi shen, which means a spirit (i.e. mind) that is completely open and completely effective, as “God of Utmost Emptiness and Life.” Based on this sort of translation, Jung thought that the Chinese had no idea that they were discussing psychological phenomena. He then tried to repsychologize the terminology, but since he did not quite understand it to begin with he could not but wind up with a distortion in the end.

But is the Wilhelm translation really so bad?

Is the first more “clear(y)” translation better than the latter? Can we ignore the theo-logical dimensions of the thoughts in this text and just refer to an «open spirit» in the same way we refer to an open door or an open house? Is the spirit in Cleary’s translation something different than the “god of utmost emptiness” of Wilhelm?

What is that “spirit” that Cleary mentions anyway, in the context of his own text which is full with words like “heavens”, “marvels” and “celestial immortals”? In that context it does not seem so wrong to call it “god” instead of “spirit” – the other way around would be actually a good criticism to Cleary himself. Why would we go into referring at all these “godly”-like entities and then criticize someone for using a “godly” word to describe the word “god” at the end? And it is also worth noting that the “god” in Wilhelm’s translation is almost obviously not a “god” in a Christian-like context but indeed more of a spirit with divine attributes. And of course one has to add the personalities and the personal history of the two translators to the picture. Wilhelm was a renowned sinologist who lived 25 years in China and had the honour of actually revieving one of the first published copies of the book – which were handed over only to people who the editor showed fit to understand the questions posed in the text. On the other hand, Cleary was a scholar and a translator. A good one per se, but without any credentials to actually prove that he had any specific knowledge related to the mental paths shadowy described in “The secret of the Golden Flower”. (studying Buddhism while at your office in Oakland does not provide such a credential)

So why is Cleary so agitated about the translation of Wilhelm? I would only speculate at the reasons – from purely shallow ones to others which may be related to deeper dogmas pertaining his thought. But I will not. Since I too have not the knowledge to read the prototype, it would be unwise to suggest that one translation is better than the other. And what is more, I simply do not want to go into that path. The meaning I am trying to convey is not to conclude which translation is better but to make a statement for texts and their translations in general. And this statement is that the text and the translation play a significant role – but at the end it is something else which “decides” whether the text is worth reading. Because in any case a text is worth something only to the extent it generates thrill and esoteric turbulence to it’s reader. And this depends not only on the text (and it’s translation) but also on the reader himself and his beliefs and philosophical viewpoint.

See your soul filling in with lust.

Is it lust for more?
Perhaps you need to change translator.

Or is it lust for less?
Perhaps then you have found what you searched for.

Finding the Golden Flower is hard.
But when you do, you will know.
And then the translation will not matter at all…