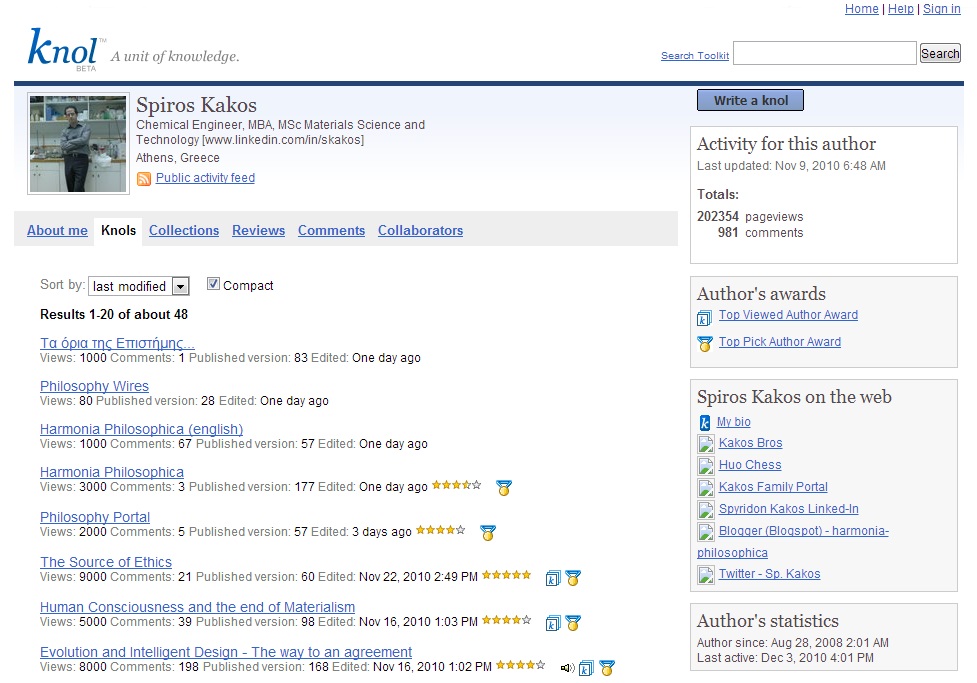 Resurrection of Google Knol: Towards Knol 2.0 and why the good die young…

Knol is not dead.

A weird statement to make, especially after Google shut it down some time ago. Let me explain things a little.

Knol was a new initiative designed to promote knowledge. Google launched it and promoted it fiercely in the first months, attracting many authors. But what was so special about it? Weren’t there enough platforms to write already? Didn’t people
already have sites and blogs? Sure. Yes. But that wasn’t what made Knol special.
Actually not even we, the authors in Knol, knew exactly what made Knol special at that time. I remember some really intense debates between teams of authors about what “Knol is” and what “Knol is not”. Even though I had my share in those debates, I must be honest: It was only after some time, after the closing of Knol that I finally realized why I liked Knol so much.

The main characteristic of Google Knols was that it promoted the idea of eponymous articles, as opposed to the anonymous avalanche of blog and Wikipedia articles. It sounds simple but it is not. Surely many people had eponymous sites where they wrote articles under their real name. But this was the first time a major platform backed up by a major Internet company promoted the idea of an “EPONYMOUS RING OF KNOWLEDGE ARTICLES” within the context of an elaborate rating system.

This is what attracted me in at the first place: The chance to write something and have people know that I wrote it under a platform supported by Google! I already had a personal site back then, but surely one can understand this is not the same as having your ideas posted online with the stamp and support of a major IT player. Knol was a clear statement towards QUALITY. (and no, Wikipedia is NOT quality! Read “Philosophy and the Wikipedia inquisition” and “Movement Against Wikipedia – Part 1. Why Wikipedia is EVIL…” and “Ban Wikipedia, Improve Internet“)

And don’t get me wrong. There were some awful articles in Knol too! But the great thing about it was that they were eponymous too! And it was not too long before such articles were “detected” by the system. Were there defects to that system? Sure! Which system hasn’t? But for something that was so new, it worked really as a clock! I remember university professors coming and writing great articles, massive amounts of fruitful comments, communities within Knol rising into existence with almost model-like organosis, even incidents of plagiarism which were spotted almost immediately and cast out of Knol (something which is simply unspeakable in the rest of the Internet)! If Google had insisted on supporting it a bit more I believe we would have one of the most prominent knowledge platforms on the Internet right now.

Knol helped build a culture of quality and – most importantly – eponymity in a place were anonymity was considered something like the holy grail. I am really happy to track my fellow Knollers and see that they have continued writing great things
under their name. Through them, the culture Knol helped build is sustained and will be transmitted to future generations.

Knol – as everything valuable – died young.
For as long as it lived, it managed to give birth to greatness.

In an era of garbage, diamonds are quickly buried. If not for anything, this is the strongest indication that something GOOD was started in Knol. And the world of anonymous copy-paste blogging hates Good. The fact that Knol was not popular
among the “masses” means that it was the right way to go. The right way is never popular.

That is why I am asking Google for Knol 2.0!
That is why Google Knol should start again!

A resurrection of Google Knol is not an impossibility. Under a more specific marketing plan this time (Knol – Eponymous Knowledge Ring) it could really master what Wikipedia has made us forget: Responsibility for what you write and do.
But even if those effort do not succeed, Knol will remain alive. And it is up to us to preserve its legacy. From that point of view, Knol 2.0 is already here!

Eponymous beings we are. Not this crude anonymous mass!

PS. Comments are welcomed in order to support Knol’s Resurrection. Knol 2.0 can be the future of article writing! And if Google does not want to make it happen, we can all make it happen on our own…